Brooks England is a bicycle saddle manufacturer in Smethwick, West Midlands, England. It has been making leather goods since 1866, when it was founded in Hockley, Birmingham. In the 1880s, the production of bicycle saddles began, the first saddle patent having been filed in 1882. In a 2014 interview with Feel Desain, a Brooks spokesperson stated that according to family legend, the company began when founder John Boultbee Brooks, a horse saddle manufacturer, tried to use a bicycle after his horse died but found the wooden seat very uncomfortable. As a result, he vowed to set about solving this problem and Brooks was born. 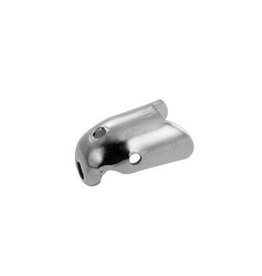 Brooks SADDLE NOSE Standard Chrome BYB 130
$8.00
Add to cart
Please accept cookies to help us improve this website Is this OK? Yes No More on cookies »